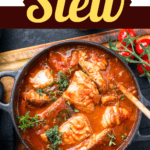 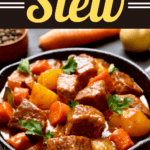 Get Paid To
Do Simple Jobs
On Social Media

Wondering how to thicken stew? You’ve come to the right place!

Nothing beats a warm and cozy stew on a cold winter day. But what if your stew isn’t as thick as you want it to be?

Want to save this blog post? Enter your email below and we’ll send the article straight to your inbox!

Should you just give up and serve that runny mess?

Absolutely not. It’s that wonderful mouthfeel and texture that makes stew the ultimate comfort food.

Also, don’t be too hard on yourself. It happens even to the best of us!

Thankfully, there are several ways to thicken that thin stew. In fact, there are at least six remedies to choose from!

With these thickeners and cooking techniques, your stews are guaranteed to be thick and creamy without fail.

How to Thicken Stew

Flour is perhaps the most common thickener for soups and stews.

It can be used in various ways, depending on the type of stew you’re making.

Here’s the first thing you need to remember: 1 1/2 teaspoons of flour is enough to thicken a cup of liquid.

Going way beyond that will make your stew gelatinous.

Also, do not add flour directly to the stew, as that will make the flour clump. Do the following methods instead.

If you’re making a meat-based stew, you want to add the flour while you’re searing the meat.

Aside from thickening the stew, it also gives the meat a nice crust.

Want to save this blog post? Enter your email below and we’ll send the article straight to your inbox!

For this method, coat the meat lightly and evenly with flour before searing.

Then, make a roux by mixing equal parts flour and butter. Melt the butter in the pot and stir in the flour until incorporated.

Whisk in the liquid until combined.

If you won’t be searing meat, a flour slurry is your best option. Just combine equal parts flour and cold water until dissolved.

Pour the flour slurry into the stew once it simmers. Bring the stew to a boil and keep stirring for about 5 minutes.

That’s how long it takes to cook the flour and get rid of its raw flavor.

Instead of using cold water to dissolve the flour, you can also use the hot liquid from the stew.

Whisk thoroughly 1 tablespoon of flour and 1/2 cup of hot liquid from the stew, and then add it back to the stew.

French for “kneaded butter,” a beurre manie is a lot like a roux, but the flour-butter mixture is added after the liquid.

With this method, there’s less likelihood of clumping.

Combine equal parts of flour and butter in a bowl until it turns into a smooth dough. Roll the dough into teaspoon-sized balls.

Add the balls to the stew one by one and stir until desired thickness is achieved.

The downside to this method is that it’s prone to lumps. Be sure to knead the flour and butter thoroughly with a fork or your hands.

The great thing about cornstarch is it thickens stews just like flour does, but is flavorless and gluten-free.

The only drawback is that it’s prone to lumping. It’s very manageable, though!

A tablespoon of cornstarch is enough to thicken a cup of liquid. If you add too much, the stew will develop a slimy consistency.

Whisk together equal parts cornstarch and cold or warm water in a bowl until combined.

Pour the slurry into the simmering stew and whisk as you bring it to a boil.

Keep boiling for one minute to activate the cornstarch and thicken the stew.

Whisk constantly to avoid scorching. But if you don’t mind the lumps, don’t!

Others actually prefer it because it adds flavor to the stew. There’s even a French culinary term for it — fond.

If you’re using cornmeal, though, stick to smooth-grind. Coarse-grind cornmeal won’t dissolve well in the stew.

The idea is to reduce the liquid in the stew by making it evaporate into thin air.

This technique is so simple, all you really need is to remove the lid.

The only disadvantage is that it takes time.

You’ll need to simmer the stew over low heat for 20 to 30 minutes until the excess liquid reduces.

Just like in the other methods, you also want to stir the stew frequently to avoid scorching.

You can also prevent this by using a thick-bottomed pot.

Thickening Stew in a Slow Cooker

You can also use some of the abovementioned techniques if you’re cooking the stew in a slow cooker.

If you’re using the flour or cornstarch slurry method, add the mixture at the last 30 minutes of cooking.

This is enough time to cook the starch and thicken the soup.

You can also prop the lid slightly open by placing skewers or chopsticks between the lid and the pot.

This will help some of the moisture escape and thicken your stew without extending the cooking time.

If you’re making a stew with root vegetables, puree the vegetables using an immersion blender.

Breaking down the vegetables will release their natural starches, which will then thicken the stew.

Other Helpful Ways to Thicken Stew

The Most Awkward Moments We All Witnessed On The Food Network

10 Out Of This World Lasagna Recipes